My last post explained that invoking swift/utils/build-script compiles the C++ source code in the apple/swift project and produces a swift compiler executable.

I'll refer to this process as the Swift build system, and I'll explain it in detail below. 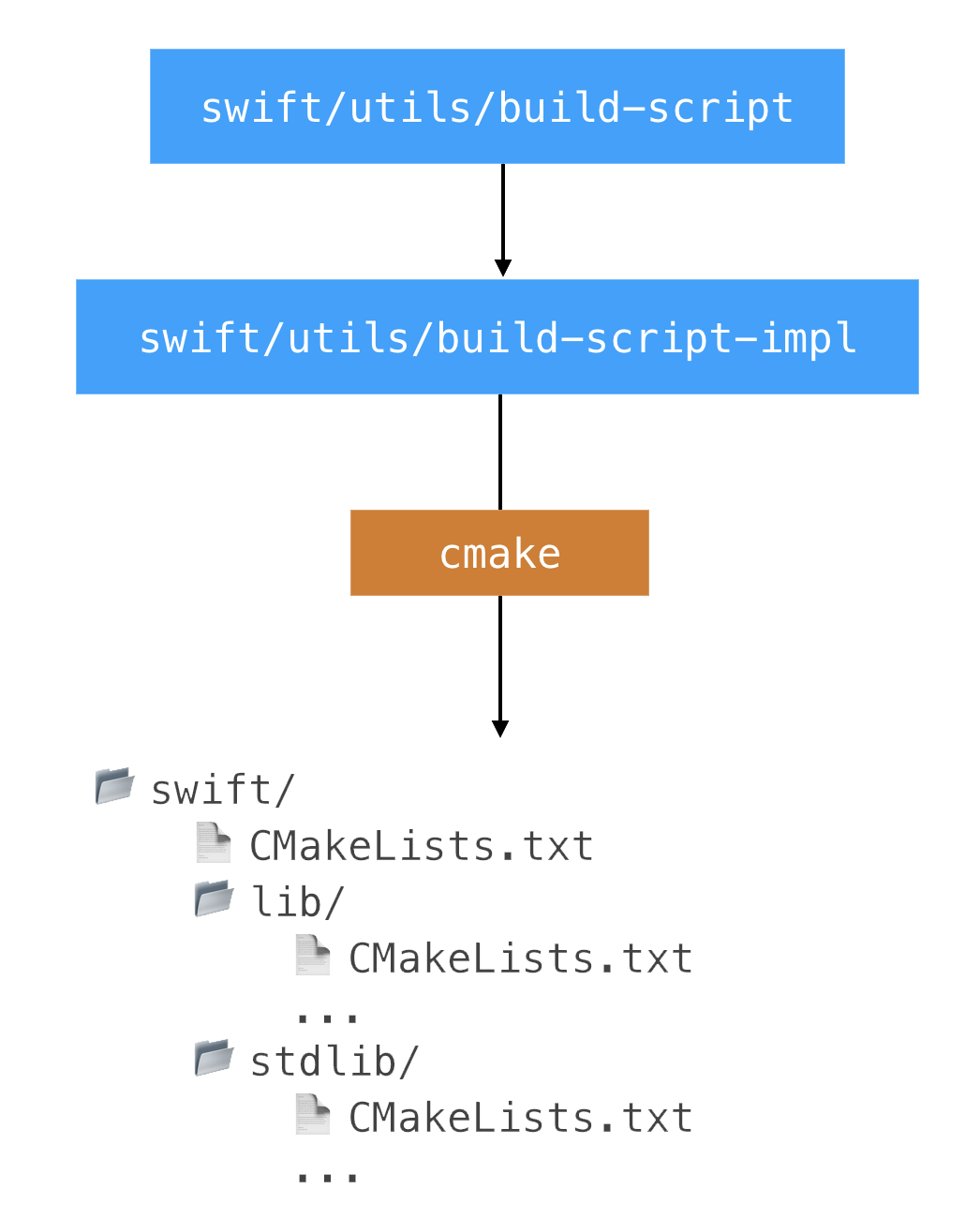 There are many benefits to having a deep understanding of the build system:

The cmake executable reads script files that describe how a software project builds. For example, here's how I'd use it to build a simple C++ program, composed of a single source file, /tmp/src/hello.cpp:

I can describe how to build this program using the CMake language, in a file named src/CMakeLists.txt:

Running cmake on the command line generates build files that are used to actually build the project:

I can then compile the hello executable by executing the build files in /tmp/build. By default, CMake generates a Makefile, which I can execute like so:

Running the above command compiles and links the executable /tmp/build/hello. Running that program outputs the expected text, "Hello!".

The above command generates /tmp/build-with-xcode/Hello.xcodeproj. I can open Hello.xcodeproj in Xcode and build hello by clicking the "Run" button:

I can also build hello via the command line, by invoking xcodebuild:

Notice how, when I didn't specify a build file generator using the cmake -G argument, cmake generated a Makefile, that I could build by invoking make. The Xcode project, on the other hand, was built by invoking xcodebuild. Remembering which invocation to use is tiresome, so cmake provides a convenient way to build using whichever files were generated:

CMake has many more features than just the three lines from my example above. I'll cover additional concepts below, as we encounter them in apple/swift's CMake code. To learn about CMake itself, try LLVM's CMake primer, or the latest official CMake documentation.

Why does apple/swift use CMake?

If you're an iOS developer, you've likely used Xcode project files to specify how your iOS application is built. So why couldn't the apple/swift project just use Xcode, too? The simple hello example above demonstrates several reasons why:

The apple/swift project is essentially the same as my "Hello" project above. Yes, it is a larger project with more CMake code, but it can be configured and built in the same way "Hello" can. Doing so is a useful exercise in understanding the apple/swift build infrastructure.

First, I'll clone the source code from the apple/swift project, as well as the three projects it depends upon:

I'll clone these projects into a directory named ~/local/Source/apple/standalone:

Before I can configure and build apple/swift, I need to build its dependencies. First is apple/swift-cmark. I'll generate Ninja build files because they're faster:

A full explanation of LLVM and Clang's CMake build system is outside of the scope of this article – perhaps I'll write about it more next year – but the following invocations configure and build apple/swift-llvm and apple/swift-clang:

Once the build finishes, the built swift compiler executable is located at ~/local/Source/apple/standalone/swift-build/bin/swift. It works exactly as well as the executable I built using swift/utils/build-script in my last post.

The apple/swift utils/build-script is a Python script that performs the exact same actions I did above:

This in turn calls swift/utils/build-script-impl:

It's clear that, compared to invoking cmake multiple times to configure and build three separate projects, one invocation of swift/utils/build-script is much simpler for new apple/swift contributors:

However, the simplicity comes at a cost:

This is a frequent stumbling block for new contributors to apple/swift.

Many experienced contributors recommend newcomers invoke ninja -C ~/local/Source/apple/build/swift-macosx-x86_64 directly in order to perform faster incremental builds of apple/swift. But a new contributor who doesn't know what swift/utils/build-script does will have a lot of questions:

Contributors familiar with the interaction between swift/utils/build-script and CMake know that swift/utils/build-script --xcode eventually calls cmake -G Xcode when configuring the apple/swift project, and so it stands to reason that invoking ninja on the configured project would not work. A slight improvement would be to recommend newcomers use cmake --build instead.

The recommended way to build the Clang project is slightly different than the way I built apple/swift with CMake. Whereas building apple/swift required me to build LLVM first, Clang is built as part of the LLVM project. LLVM's CMake automatically detects when Clang is present at llvm/tools/clang. If it is, then LLVM's CMake includes Clang in the build.

It turns out that apple/swift can be built in this way as well:

Configuring and building apple/swift "in-tree" requires fewer options to be specified on the command-line, because the paths to the apple/swift-llvm, apple/swift-cmark, and apple/swift-clang source and build directories are inferred by Swift's CMake code:

Compared to the "standalone" build I first tried, in-tree builds of apple/swift don't require me to remember to recompile apple/swift-llvm. If I make any changes to the apple/swift-llvm source code, they will be recompiled the next time I invoke cmake --build.

However, in-tree builds are not the official documented way to build apple/swift; if I encounter an error related to the build system, it's on me to file a bug and maybe even fix it myself.

For newcomers to apple/swift, I would recommend either using swift/utils/build-script, or the standalone setup.

Next Sunday morning, I'll post a "deep dive" into apple/swift's CMake code: how it uses a "recursive make" pattern, examples of how I read the code to see what it does, and some summaries of how things like the compiler itself, the standard library, and the test suite are built.